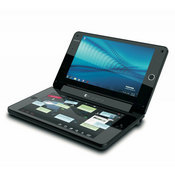 Toshiba Libretto W100 Ultra Mobile PC
Toshiba on Monday announced the launch of the Libretto W100 ultra-mobile PC, which some observers are calling a hybrid between a mini-notebook and an e-reader. The announcement was made in conjunction with the 25th anniversary of the company's entry into the portable PC market. The manufacturer also introduced other models for different market segments.

The Libretto W100 has dual 7-inch, diagonal multi-touch screens that work horizontally or vertically. When held vertically, users will be able to page through both displays. When held horizontally, the lower screen serves as a keyboard and the upper screen as the display monitor. The Libretto measures 4.84 inches by 7.95 inches, weighs under two pounds, and has a clamshell design. It runs on Windows 7 and has built-in Bluetooth 5 and 802.11n wireless networking.

Users can surf the web on one screen while simultaneously checking e-mail on the other, according to Toshiba. The Libretto W100 also lets users share, stream, and synchronize files and multimedia. It also comes with a USB port and built-in memory reader for transferring information to and from external hard drives and other types of devices.

Toshiba released its first laptop, the T1100 in 1985. To commemorate its 25 years in the PC business, it is also launching other models, including the 25th anniversary edition Portégé R700 ultra-portable laptop, which is geared at business users. The Portégé R700 has a 13.3-inch screen with a full keyboard and a DVD drive, with prices starting under $1,000. A consumer version of the laptop will sell for $889 at Best Buy.

All of the models will be available in Japan throughout the summer. Pricing information was not released.