SEARCH
A minimum of 3 characters are required to be typed in the search bar in order to perform a search.
Announcements
Event
Emerging Cybersecurity Technologies: What You Need to Know - A Dark Reading March 23 Virtual Event | <GET YOUR PASS>
Report
Black Hat USA 2022 Attendee Report | Supply Chain & Cloud Security Risks Are Top of Mind | <READ IT NOW>
PreviousNext
Database Security
2 MIN READ
News

The PC is geared to home users and students, with quick access to photos, videos, and apps and an option that wirelessly streams the laptop's display to a compatible HDTV.
Antone Gonsalves
Contributor
June 21, 2010 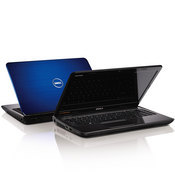 The computer maker's latest notebooks include 14-, 15-, and 17-inch versions. All three include the Dell Dock, an application that gives users the option of placing their favorite content and applications at the top of the screen for quick access.

The laptops have curved edges and are available in four colors, each with chrome accents. The entertainment focus of the notebooks, along with the stylish design, is meant to appeal to students and people looking for a family PC.

The Inspiron Rs are available with the Intel Wireless Display feature as an option. The technology makes it possible to stream wirelessly what appears on the laptop display to a high-definition TV that also supports the Intel product.

Other options include Microsoft Office 2010 and a 1-GB graphics processor from Advanced Micro Devices' ATI unit. Buyers can also choose between an Intel Core i3 and Core i5 mobile processor.

Other options include up to a 640-GB hard disk drive and 8 GB of DDR3 system memory. The two larger models have a dedicated 10-key number pad. All the systems are configured to take advantage of Dell's online backup service, called DataSafeOnline.

Inspiron R laptops, released Monday, ship with Windows 7 and have a starting price of $449.

The low price point of the Inspiron R reflects Dell's continued focus on low-cost PCs for consumers and business. The company is also moving beyond the PC into new markets, such as smartphones and tablet-like computers.

Dell's smartphone the Aero, will be available in the United States first through AT&T, which is taking preorders, but hasn't said when the device would be released. Dell formally introduced the smartphone late last year in China and Brazil.