Spokesman tells a congressional hearing that the controversial section will not be reopened in the U.S.
Antone Gonsalves
Contributor
September 16, 2010 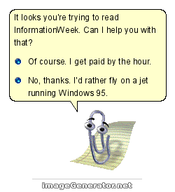 (click image for larger view)
Top 10 Most Hated Tech Mascots Ever
Craigslist has told a congressional hearing that it has "terminated" its controversial adult services section, which law enforcement and advocacy groups claimed promoted sex trafficking.

William Clinton Powell, director of customer service and law enforcement relations, testified Wednesday before a subcommittee of the House Judiciary Committee. The subcommittee is investigating sex trafficking in children.

In his opening remarks, Powell described the "industry-leading best practices" Craigslist had implemented to prevent illicit services from being offered on the site. Nevertheless, criticism of the adult service section intensified recently when a letter signed by 17 state attorneys general called on Craigslist to shut down the section. Powell said the site had complied.

"As of Sept. 3, 2010, Craigslist has terminated its adult services section," Powell said in his testimony. "Those who formerly posted adult services ads on Craigslist will now advertise at countless other venues. It is our sincere hope that law enforcement and advocacy groups will find helpful partners there."

Without giving a reason or making a formal announcement, Craigslist shuttered the adult services section 12 days ago by slapping a "censored" banner on the area where a link once took the visitor to the section. Craigslist has since removed the banner.

The takedown occurred almost two weeks after the attorneys general sent a letter to Craigslist chief executive Jim Buckmaster and founder Craig Newmark, warning them that "ads for prostitution -- including ads trafficking children -- are rampant on it." The prosecutors also called on the site to shut down the section permanently.

Less than a week after Craigslist dropped the section, human rights groups called on the site to also shut down similar sections in other countries. Craigslist continues to run such sections outside the United States.