Who Is Syrian Electronic Army: 9 Facts 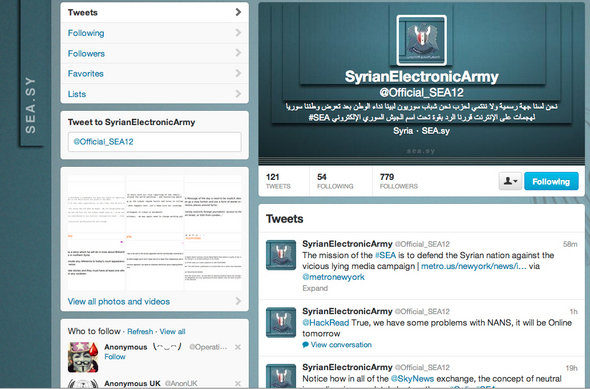 Beyond hoax hacking reports, the Syrian Electronic Army has faced a few other recent challenges, such as having multiple domains seized by its domain registration firm. "After we communicated with the host/domain names company 'Network Solutions' [it] ... said that the reason for shut down the domains names is 'U.S. sanctions,'" according to a post to the group's subsequently launched site, sea.sy. It said the seized domains were syrian-es.org, syrian-es.com and syrian-es.net, and that it would continue to use its backup domain, syrianelectronicarmy.com.

"Current domain registration information for syrian-es.com, syrian-es.org, and syrian-es.net shows that the current registrant is OFAC Holding," according to a report published by HP Security Research. "OFAC is the Treasury Department Office of Foreign Assets Control under their Office of Terrorism and Financial Intelligence."

Domain names aren't the only online real estate that the Syrian Electronic Army is having difficulty retaining. As the group has used Twitter accounts to publicize attacks, Twitter has suspended those accounts, creating a whack-a-mole situation that saw the introduction of new account "@Official_SEA," which Twitter subsequently froze, leading to multiple variations. Currently the count stands at @Official_SEA12, which the group has held for a relatively long time, suggesting that it has stopped using the account to announce its latest Twitter hacks.

Syria Back Online After Internet Blackout