SEARCH
A minimum of 3 characters are required to be typed in the search bar in order to perform a search.
Announcements
Event
Emerging Cybersecurity Technologies: What You Need to Know - A Dark Reading March 23 Virtual Event | <GET YOUR PASS>
Report
Black Hat USA 2022 Attendee Report | Supply Chain & Cloud Security Risks Are Top of Mind | <READ IT NOW>
PreviousNext
Attacks/Breaches
1 MIN READ
News 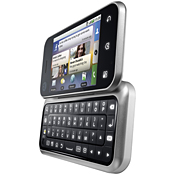 Adding to its growing portfolio of Android phones, Motorola unveiled its Backflip phone, which features an unusual fold-out keyboard rather than a standard slide-out keyboard.

Launched at the International Consumer Electronics Show in Las Vegas Wednesday by Motorola's CEO of Mobile Devices, Sanjay Jha, the device is scheduled to be available in the first quarter.

The fold-out qwerty keyboard is complemented by the Backflip's 3.1-inch HVGA screen and its touch panel Backtrack feature on the reverse side of the handset. The phone also has Wi-Fi and Bluetooth access as well as a 5 mega-pixel camera.

"Since introducing our first Motoblur-based device, we've remained focused on differentiating the Android experience," said Jha in a statement. "Backflip maximizes the multi-tasking and multi-functional potential of Motoblur."

After losing its strong lead in mobile phones, Motorola brought in Jha in 2008 to attempt to regain its footing. A former Qualcomm executive, Jha has concentrated on developing a strong alliance with Google and its Android phones. To date, Motorola has had success with Android phones marketed by Verizon Wireless and T-Mobile in the U.S. as well as in other countries scattered around the world. "Our brand name still has tremendous relevance around the world," said Jha at a CES press conference.

On Wednesday AT&T announced it will offer five Android phones this year, but it did not specify whether the Backflip will be one of them.