Breach disclosures are down, and reported ransomware attacks have also plummeted. Good news -- or a calm before the storm?

The number of breaches disclosed by healthcare companies to the US government declined slightly in the first half of the year compared with the latter half of 2019, according to a new analysis of the data provided by the US Department of Health and Human Services.

The analysis found the number of breach reports declined 10% in the first half of 2020 compared with the previous six months, and the number of compromised records fell by a stunning 83%. Combined with a previously reported decline in reported ransomware attacks on healthcare organizations, the study suggests healthcare companies are seeing fewer cyberattacks.

The reason for the respite, however, is not clear. The data could suggest that healthcare companies have become more serious about cybersecurity or that cybercriminals have made good on a reported pledge to not interfere with healthcare during the pandemic.

Neither explanation is likely, says Drex DeFord, strategic executive at CI Security, which published the data in a report released today. CIOs have told the company that they are pushing their systems to the limit by having thousands of people work from home, supporting mobile medical staff, and dealing with new suppliers, he says.

"What we are seeing in the breach portal does not feel very consistent with the disruption of sending people home to work, adding a lot of IoT, connecting a lot of new medical devices, and connecting to a lot of new suppliers because you can't get an adequate supply of PPE," DeFord says. "There are a lot of things in there that lead us to believe that there should be more cybercrime and more breaches than are being reported."

The surge in 2019 came because cybercriminals found fertile ground for ransomware in the healthcare organizations' vulnerability to phishing attacks and network exploits, and because the organizations could not suffer much downtime to their operations, security software provider Emsisoft said in its 2019 report.

"Ransomware incidents increased sharply in 2019 due to organizations' existing security weaknesses and the development of increasingly sophisticated attack mechanisms specifically designed to exploit those weaknesses—combined, these factors created a near-perfect storm," the company stated.

Emsisoft's latest report on ransomware in the first six months of 2020 does not directly attempt to explain the decline in attacks, except to say: "Between January and April 2020, the number of successful attacks on public sector entities decreased month-over-month as the COVID-19 crisis worsened."

Distributed denial-of-service (DDoS), however, is one type of attack that has apparently increased. Network security firm NetScout has seen a 25% increase in DDoS attacks in the first half of 2020 compared with the same period a year ago, the company said. The increase in use of telemedicine during the pandemic may make doctors' offices and hospitals a larger target, says Hardik Modi, assistant vice president of engineering for Netscout's threat and mitigation products.

"The provisioning and delivery of healthcare has undergone a sea change during the COVID period, with a large growth in the use of telehealth," he says. "The increase in prominence of such services tends to attract the attention of the criminal element on the Internet, whether for ransom/extortion campaigns or sheer nihilism.”

Dark Reading's own analysis of the US Department of Health and Human Services data shows the number of breaches has declined on average by about 3% in the first half of 2020 compared with the previous six months. In addition, outside of a few major breaches — such as the leak of records by the American Medical Collection Agency that its clients, such as Lab Corp. and Optum360, recorded in July 2019 — the overall number of compromised records remained fairly steady. 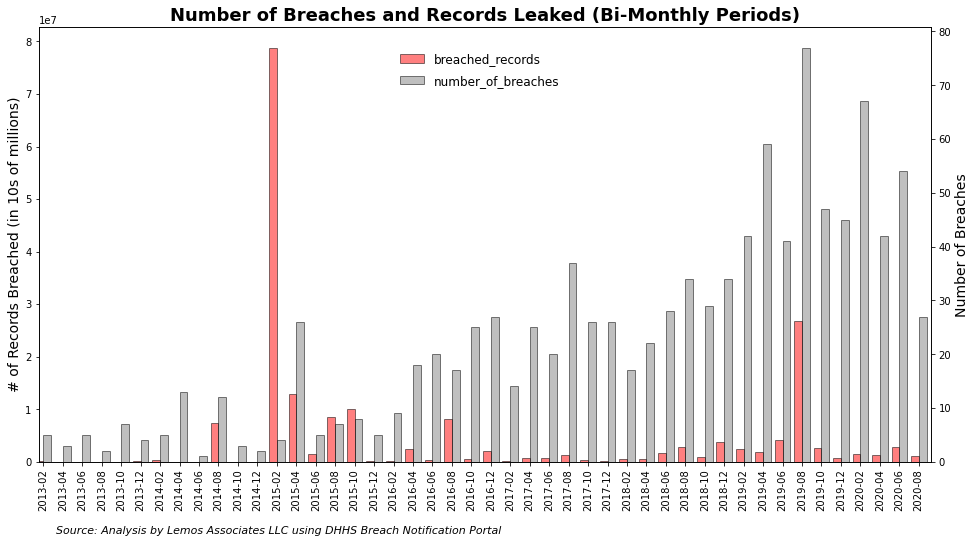 The decline in breaches noted in the CI Security report could also be because healthcare firms are not reporting ransomware as a breach or because the organizations do not have the visibility to track threats in their newly distributed workforce. The latter issue could mean attackers have infiltrated networks, but they are doing reconnaissance rather than immediately attacking, says CI Security's DeFord.