9 Android Apps To Improve Security, Privacy
(click image for larger view)
Psychoanalysis fans, rejoice: You might soon be able to log in to websites using inkblots. So goes the pitch for a new password mechanism developed by researchers at Carnegie Mellon University.

The three researchers have dubbed their new system Gotchas -- for Generating panOptic Turing Tests to Tell Computers and Humans Apart -- which they said boils down to "a randomized puzzle generation protocol, which involves interaction between a computer and a human," according to a summary of their research. They're scheduled to present a related "Gotcha Password Hackers!" paper at the 2013 ACM Workshop on Artificial Intelligence and Security (AISec) next month in Berlin.

Here's how a Gotcha works: First, an inkblot gets generated, and a user is asked to enter a text description. The site then stores both inkblot and description for whenever the user returns, at which point it displays the inkblot and asks the user to recognize their previous description from multiple potential selections.

Information security researchers have already tested inkblots -- which of course recall the Swiss Freudian psychiatrist and psychoanalyst Hermann Rorschach's pioneering, eponymous work -- as an authentication mechanism. But previous approaches forced users to recall the exact phrase they'd first used to describe the stored inkblot, which created a usability challenge, the Carnegie Mellon researchers argued. By comparison, the construction of their system "relies on the usability assumption that users can recognize the phrases that they originally used to describe each inkblot image," they said.

One use for Gotcha would be to prevent attackers from grabbing password files from servers, then cracking them offline, which continues to be a pervasive problem. "Any adversary who has obtained the cryptographic hash of a user's password can mount an automated brute-force attack to crack the password by comparing the cryptographic hash of the user's password with the cryptographic hashes of likely password guesses," the researchers said in their paper. "This attack is called an offline dictionary attack, and ... [such attacks] are -- unfortunately -- powerful and commonplace." Indeed, numerous companies, including Gawker, LinkedIn, Sony and Zappos, have seen their users' passwords compromised in this manner.

By using Gotchas, businesses could "mitigate the threat of offline dictionary attacks against passwords by ensuring that a password cracker must receive constant feedback from a human being while mounting an attack," the researchers said. In other words, even if attackers recovered usernames and passwords via an offline dictionary attack, they'd still need a human to manually handle one or more Gotcha challenges before gaining access to any given account. From an economic standpoint, such attacks likely wouldn't be worth an attacker's time. 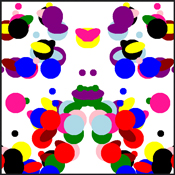 As the name Gotcha suggests, the proposed new system might also serve as a replacement for the reviled Captcha tests currently employed by many sites as a challenge-response mechanism. Captcha -- based on the word "capture" -- is an acronym for Completely Automated Public Turing test to tell Computers and Humans Apart. The technique, likewise developed at Carnegie Mellon, but back in 2000, was intended to allow a computer to tell if it was dealing with a human or another machine.

Will the new Gotcha system be stronger than the Captcha that people have come to know and despise? To test that possibility, the Carnegie Mellon researchers have issued an open call to security researchers to try to break their inkblot-matching Gotcha construction techniques via their Gotcha Challenge website. "The goal of this challenge is to see if artificial intelligence techniques can be applied to attack our Gotcha construction," they said.