How long does it take to patch an entire distribution and bring it up to date? Longer than you think.

When Windows XP reached its end of life, there were approximately 257 outstanding security patches required to bring the OS up to date -- and this was considering cumulative versions for both commercial and business, as well as patch supercedence. Since the source code is closed, it never suffered from the fragmentation issues affecting many vulnerabilities, such as what we saw last year with the now infamous Shellshock -- impacting a half-billion Web servers and other Internet-connected devices.

On September 24, 2014, when the bug was first disclosed, open source, Linux, OS X, embedded systems, and Unix all were affected and in total, versions available from 1994 (version 1.14) to 2014 could be exploited due to this GNU bash shell vulnerability. But in the intervening 12 months, a lot more needed to be done than just patching a single platform and bringing it up to date. That in itself is something many organizations still find difficult to do today.

By Bf5man [CC0], via Wikimedia Commons

Why are these facts important on the one year anniversary of Shellshock? Over time, it’s become more difficult to properly perform a thorough vulnerability assessment of all the vulnerabilities that have been found in the past, many of which are still applicable. However, the biggest issue is the cumulative problem of flaws which are affecting systems. Information security teams must remember that Shellshock and other flaws are not gone even though they’ve disappeared from media headlines. Some systems, due to age, end of life, or a vendor’s incompetence, still remain unpatched today.

While mitigating controls may help reduce or eliminate the risk, the fact remains that any newly identified vulnerabilities aggravate the problem and increase the total vulnerability count with each new flaw. Shellshock, as bad as it was and may be still to this day, is just another critical vulnerability in the process and systems that are not being patched, or even assessed. This creates a cumulative risk problem, which could allow an exploit through multiple vectors versus just one.

While this may seem like common sense, it represents an interesting problem: How long does it take to patch an entire distribution and bring it up to date? Depending how many missing patches exist, more time is needed to remediate and with each new finding the snowballing effect of risk grows. This is true for any operating system and application, even when a single cumulative security update is available; the more you have to patch, the longer it will take, and the more it costs to do so.

So how can infosec teams reduce the cumulative side effects from new vulnerabilities? Here are five suggestions:

When was the last time you checked under the hood for the cumulative impact of Shellshock or other vulnerabilities? Let’s chat about that in the comments.

With more than 20 years of IT industry experience and author of Privileged Attack Vectors and Asset Attack Vectors, Morey Haber joined BeyondTrust in 2012 as a part of the eEye Digital Security acquisition. He currently oversees the vision for BeyondTrust technology ... View Full Bio

Excellent points.  In my convos with IT security professionals, poor patch management is perhaps the biggest and most prolific problem they see -- and it's extra frustrating because it's such a simple fix (assuming, of course, you have a good testbed available -- lest you end up like Verizon not too long ago).
Reply  |  Post Message  |  Messages List  |  Start a Board
Hot Topics
Editors' Choice
11
COVID-19: Latest Security News & Commentary Dark Reading Staff 5/28/2020
7
Cloud Security Architect Proves Hardest Infosec Role to Fill Dark Reading Staff 5/27/2020
6
Stay-at-Home Orders Coincide With Massive DNS Surge Robert Lemos, Contributing Writer,  5/27/2020

More Informa Tech Live Events
The Threat From the Internet - and What Your Organization Can Do About ItIT Automation: Scaling to the FutureDon't Miss this Dark Reading Virtual Event on Critical Data Breaches

All Videos
Cartoon Contest
Write a Caption, Win a Starbucks Card! Click Here Latest Comment: Can you smell me now?

How Cybersecurity Incident Response Programs Work (and Why Some Don't)This Tech Digest takes a look at the vital role cybersecurity incident response (IR) plays in managing cyber-risk within organizations. Download the Tech Digest today to find out how well-planned IR programs can detect intrusions, contain breaches, and help an organization restore normal operations.
Download This Issue! 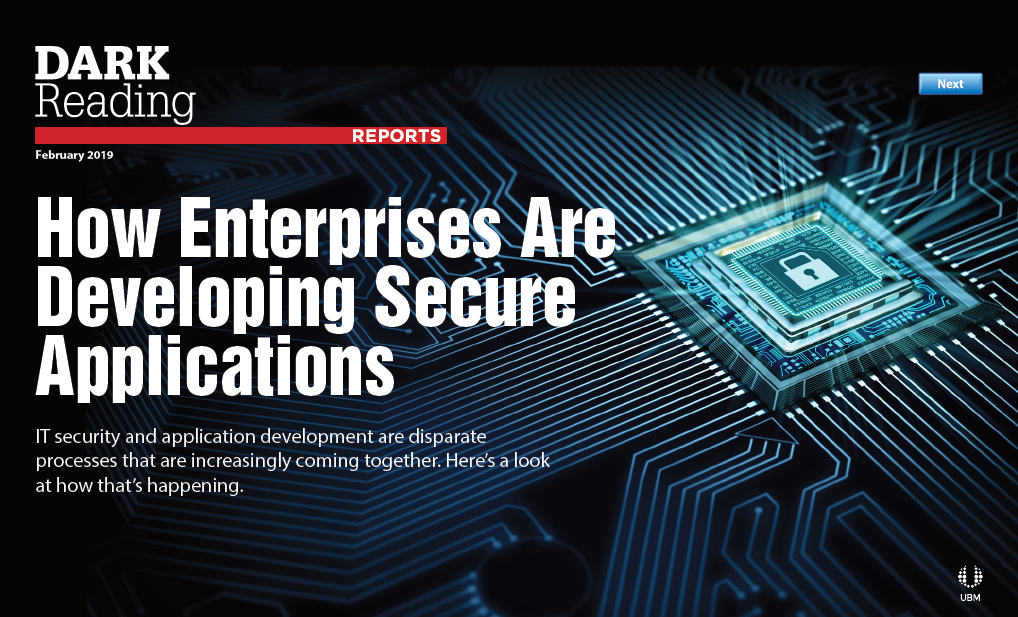 How Enterprises Are Developing Secure Applications IT security and application development are disparate processes that are increasingly coming together. Here's a look at how that's happening.
Download Now!

How Enterprises Are Using IT Threat Intelligence

Online Malware and Threats: A Profile of Today's Security Posture