Politics has taken center stage in many countries around the world as rapid social and economic changes roil almost the entire Western hemisphere, including in the US and Europe. It now seems that the authors of recent ransomware campaigns are also dipping their toes in the political waters, at least in terms of naming those campaigns.

Earlier this month, a group of anti-malware researchers known as the Malware Hunter Team discovered a ransomware campaign named for former President Barak Obama that also doubled as malware used to mine the Monero cryptocurrency. The Obama campaign came after a similar one -- possibly by the same cyber-threat group -- named after current President Donald Trump, and now another ransomware effort is using the name of German Chancellor Angela Merkel.

In a blog post, researcher with McAfee noted that it's not unusual for threat actors to leverage the names of famous people to lure victims into downloading the malware, but the focus on political figures is "a relatively recent tactic by ransomware developers looking to exploit the profiles of major politicians to install ransomware on victims' computers. Donald Trump, Angela Merkel, and now Barack Obama all serve as lures for the unsuspecting." 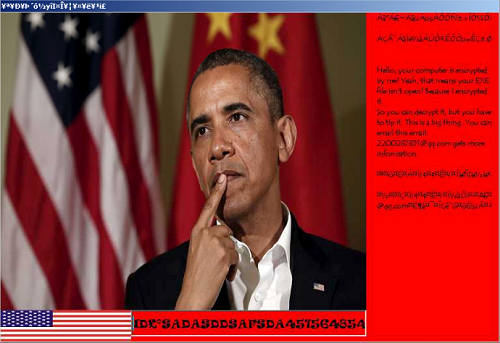 Christiaan Beek, lead scientist and principal engineer with McAfee, told Security Now that company researchers "have seen a lot of different themes around ransomware families, where most don't care about the image. In these particular cases, it was surprising that political figures were used, where in some cases you might think they use it as a kind of parody." (See SamSam Ransomware Nears $6M Mark in Ill-Gotten Gains .)

Like most ransomware, the Obama, Merkel and Trump malware use phishing techniques to entice victims into downloading the malware onto their systems. According to the McAfee researchers, once in, there are differences in the way the campaigns operate. They wrote that the Obama ransomware "displayed some confusing characteristics. For example, it encrypted only .exe files and asked for a tip to decrypt the files. This campaign does not behave like normal ransomware variants, which typically target user data files rather than .exe files."

The unusual aspects of the malware got the researchers wondering if a nation-state was behind the campaign -- which dubbed itself "Barack Obama's Everlasting Blue Blackmail Virus" -- and while the language in the malware is simplified Chinese, there isn't enough evidence yet to determine a source, they said. The oddities of the malware also led them to question the purpose of the ransomware and -- because it only encrypted .exe files -- even if it was ransomware.

Researchers found the cryptomining component in the malware and noted that it was almost identical to the ransomware part, with almost 80% of the code used in the two.

The campaign using Trump's name dates to September 2016, when he was still a candidate. The malware was only a development version and not nearly as sophisticated as the Obama ransomware, though it's similar, leading some researchers to believe the same group is behind both. The Trump malware encrypts files with AES and can "decrypt" the files if a person clicks on an "unlock files" button, according to McAfee.

The ransomware campaign named after Merkel sticks with its European theme. It encrypts files using the .angelamerkel extension and also uses AES to encrypt files. In addition, the malware -- whose original name was ChromeUpadter.exe -- calls for Euros when making its ransom demand.

It's unclear who is behind the Merkel campaign, though McAfee researchers said the Trump and Merkel malwares are 46% identical in their codes.

Ransomware was the high-profile malware of 2017 in the wake of such high-profile campaigns as WannaCry, Petya and SamSam. However, toward the last few months of 2017 and through the beginning of this year, ransomware gave way to cryptomining, a much stealthier and easier way to make money. A number of cybersecurity solution providers noted the trend, with Trend Micro researchers noting in their Midyear Security Roundup 2018 a 141% year-over-year increase in cryptomining activity during the first six months of the year and 47 new miner malware families. (See Trend Micro: Cryptomining, Data Breaches Highlight Busy 1H 2018.)

During the same time, there was only a 3% rise in ransomware activity and a 26% decrease in the number of new ransomware families found.

The Obama, Merkel and Trump campaigns show that ransomware is still around, and McAfee researchers said enterprises can protect themselves by doing complete backups of their data, using encryption tools and leveraging comprehensive security solutions.